Seattle and Roanoke / A Tale of Two Plays 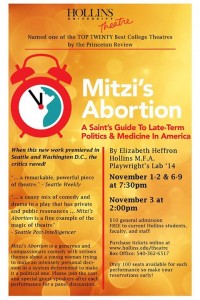 Elizabeth has both coasts covered tonight with a performance of Mitzi’s Abortion at Hollins University Theatre in Roanoke, Virginia (see review) AND a performance of Bo-Nita at Seattle Rep.

Bo-Nita plays at Seattle Rep until November 17 (see reviews) and then moves to a run at Portland Center Stage, February 1, 2014.