“Stars are aligned” for Bo-Nita, a “Poignant” “Little Miracle”

Beguiling, shattering, poignant … The reviews are in for Elizabeth’s Bo-Nita, now through November 17 at the Seattle Rep. 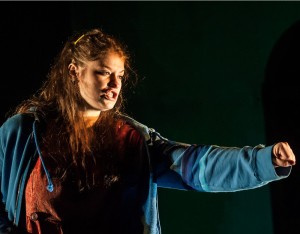 Sometimes the stars align perfectly in the theater. The play is excellent, the directing crisp and the acting picture perfect. This doesn’t happen very often but when it does, a spectator feels like she’s just won the Powerball lottery. A Searing Portrait of a Young Girl’s Life, by Alice Kaderlan, Seattle P-I

The magic of Heffron’s writing—and Mootz’s performance and Budraitis’s direction—is its deftness, its ability to slip these bitter questions into a story that is, despite itself, still funny. Bo-Nita, like its title character, is a little miracle. A Grim Caper, by Brendan Kiley, The Seattle Stranger

Seattle-based Heffron’s cluttered, revved-up, ultimately poignant script swerves between a comedy of the grotesque that draws guffaws and cringes, and a compassionate study of a bright, at-risk kid who talks tough but can’t always mask her hurt and loneliness. Misha Berson, Seattle Times.

Mootz teeters between girl and hag, thug and wag, with nary a moment’s conflation. Her multiple performances in one seal her reputation as one of Seattle’s most intriguing and technically adept talents. Though the only performer onstage, each of her distinct characters steals scenes from the others; it’s a stage trick like an Escher drawing. Opening Nights, Bo-Nita, Margaret Friedman, Seattle Weekly.

This entry was posted in Performances and tagged Bo-Nita, Seattle Rep. Bookmark the permalink.

One Response to “Stars are aligned” for Bo-Nita, a “Poignant” “Little Miracle”